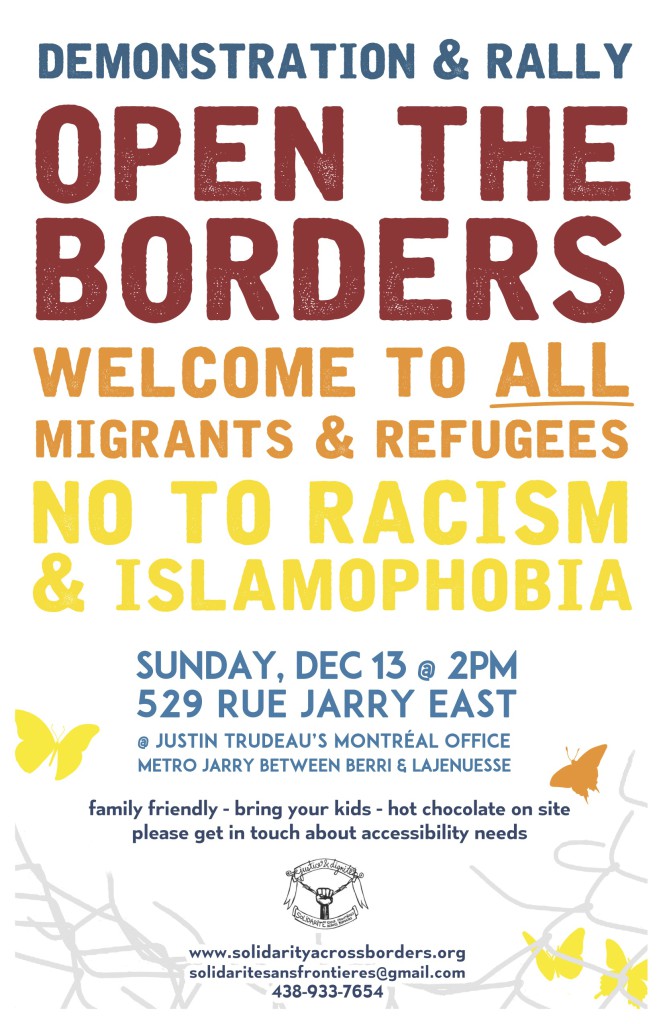 Open the Borders! Welcome to ALL refugees and migrants! No to racism and Islamophobia!
Demonstration & Rally
SUNDAY, DECEMBER 13, 2pm
529 Jarry East, at Justin Trudeau’s Montreal office
(métro Jarry, between Berri & Lajeunesse; map: https://goo.gl/maps/G14xJbp2fUK2)Family-friendly demonstration. Bring your kids.
Please get in touch about any accessibility needs.
Hot chocolate on-site.
Please share this event widely.
—–Solidarity Across Borders calls this urgent demonstration to express our collective opposition to the continued racist and Islamophobic backlash against migrants and refugees in Canada and worldwide. We join our voices with millions around the world who declare “Refugees Welcome” and support grassroots solidarity efforts for all refugees and migrants.We denounce the continued hypocrisy of the Canadian government, that on the one hand engages in self-serving publicity to celebrate the arrival of certain refugees, while continuing to systematically ignore the reality of hundreds of thousands undocumented and temporary migrants living precariously in Canada.  We stand in solidarity with those who struggle to resist their deportations and forced removals, and denounce the violence of deportation that breaks up families and uproots people from their communities.We are inspired by the courage and resistance of migrants, tens of millions worldwide, who seek better lives, as human beings have done for centuries, and defy state-imposed border controls. We assert that all human beings have the freedom to move, the freedom to stay, and the freedom to return, and that border regimes are inherently racist and violent.While we welcome the current arrival of thousands of refugees fleeing war in the Middle East, we assert that the Canadian state can and should accept many more refugees, from all impacted regions of the world. We are critical of the distinction between political and economic refugees, and support the choices of all migrants to seek safety, security and opportunity. In particular, we denounce the racism that denies the humanity of some migrants, particularly Black migrants from Africa.

It is the economic, political and military choices of Western governments, including Canadian governments, that create the conditions of the mass displacement of migrants in the first place. Imperialist wars and militarism feed oppression. Colonial-capitalist relationships exploit the people, resources and eco-systems of the majority world.Canada — through its military policies, weapons sales, corporations, and extractive industry — is centrally involved in this process. This is why we recognize and support Indigenous struggles for sovereignty and self-determination against ongoing colonialism here in Canada.

While we continue to contribute to a Solidarity City network of direct support and mutual aid in Montreal, we re-iterate our demand for the full, complete and ongoing regularization of all non-status and undocumented persons living in Canada. Status For All!