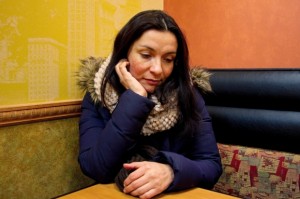 UPDATE (February 4, 11:30am) Today at Montreal’s Federal Court, Judge Harrington granted a temporary stay of deportation to Ivonne Hernandez. Effectively, that means Ivonne will not be removed from Canada and her community imminently. The judge cited the “irreparable harm” that would be caused if Ivonne was to be deported now and permanently separated from her 13-month son. The struggle is not over, however. Ivonne could face another deportation date in the future (after matters at Federal Court are settled). Moreover, Ivonne is facing a continued struggle at Family Court to regain custody of her child. The Family Court must be made to understand that the immigration status of a loving parent cannot be used against them in any custody matter.

The Friends of Ivonne — a group of friends, allies and supporters working directly with Ivonne Hernandez — will continue to send updates and information to everyone who has been in touch and expressed concern. For now, we still encourage letters to the Minister of Immigration demanding that Ivonne’s status be regularized immediately; we also encourage organizational letters of support for Ivonne (visit www.solidarityacrossborders.org/en/support-letters-for-ivonne-hernandez for a compilation of the close to 50 letters received so far); and we encourage donations to Ivonne’s support fund, to help pay legal costs related to the immigration and family court matters. Information about how you can help is available below.

Solidarity with Ivonne!
Status for All!

-> Non-status survivor of conjugal violence has lost custody of her son, was arrested and detained in pre-planned ambush by border agents, and is facing deportation on 7 February.

-> Read more below about what you can do, including writing letters to the Canadian Ministers of Immigration and Public Security, and the Quebec Minister of Immigration as well as writing organizational support letters and contributing to fundraising efforts.

Ivonne Hernandez is a survivor of conjugal violence who has been living without immigration status in Canada for a year and a half. She was arrested in a pre-planned public ambush involving border authorities at Berri-UQAM metro station last week on January 22, 2014. Ivonne was arrested while she was picking up her one-year old son from her ex-partner, who had denounced her to immigration.

Ivonne Hernandez was released from immigration detention on January 24 on a $4000 cash bond. She is required to report to immigration authorities regularly. On January 28, Le 28 janvier, the Canadian Border Services Agency decided that she would be deported on February 7th and refused to allow her to stay until March 6th, the date of a hearing to review the decision to grant custody of her child to his father. Should Ivonne be deported, she would be separated from her son, perhaps for life.

Ivonne Hernandez came to Canada to seek asylum in 2009. In 2011, her refugee application was refused in 2011 and she ordered deported. Rather than return to the very real danger she faced in Mexico, Ivonne joined the estimated half a million people living without papers in Canada, among the most vulnerable and exploited members of our society.

On December 11, 2013, Ivonne fled her home with her son to take refuge in a shelter for women victims of conjugal violence. Her ex-partner promptly denounced her to authorities.

In a shocking and rushed ruling on January 10, 2014, a judge awarded custody of Ivonne’s son to the Canadian father solely because of Ivonne’s vulnerable immigration status. Ivonne and her son are allowed to see each other only eight hours a week.

Canada has made it very difficult for people in Ivonne’s situation to regularize their status. Although Mexico has one of the highest rates of domestic violence in the world, and has an extremely high homicide rate, Canada has placed Mexico on a list of “safe countries”, countries that Canada claims can protect its citizens from violence.

A request to re-open Ivonne’s immigration file was made in November, because immigration officials failed to take all of the evidence into account, but there has not yet been a response. However, the Minister of Immigration has the discretionary power – and the obligation under international law – to intervene in the file and regularize Ivonne’s status.

On February 4th, the Federal Court will study Ivonne’s request for a stay of removal, so that she may be able to stay in the country until March 6th and attend the hearing that will determine whether she may regain custody of her child.

i) Write Organizational Letters of Support

We encourage organizations to write public letters of support for Ivonne that we can share publicly on our website. Letters written uniquely by organizations (collectives, associations, unions, locals, shelters, community centers, cooperatives, etc) have a greater impact than a generic letter. Please send your open letter of support to the Ministers named below as well as to justicepourivonne@gmail.com.

Demand that Minister Alexander immediately regularize Ivonne Hernandez’s status in Canada, which he has the power to do.

Demand that Minister Blaney cancel the removal order against Ivonne Hernandez, which he has the power to do.

There are several costs associated with providing support to Ivonne’s struggle for justice in Canada, mainly involving paying both immigration and family lawyers to effectively prevent Ivonne’s deportation, and ensure she regains custody of her child. We encourage you to donate, whether it’s $10, $20, $100 or more. You can contribute by cheque, paypal or in cash, and you can contribute by mail, online, or in person.

By cash:
Contact justicepourivonne@gmail.com to arrange a cash contribution. Alternatively, you can visit the following address between 12pm-6pm, Monday-Thursday, to make a contribution in person: 1500 de Maisonneuve West, #204 (métro Guy-Concordia).

← Timeline & Background Information (Education For All Collective)
(March 3) Brass Monday, a fundraiser for Solidarity Across Borders, with Fanfare Jarry and Brassmob →