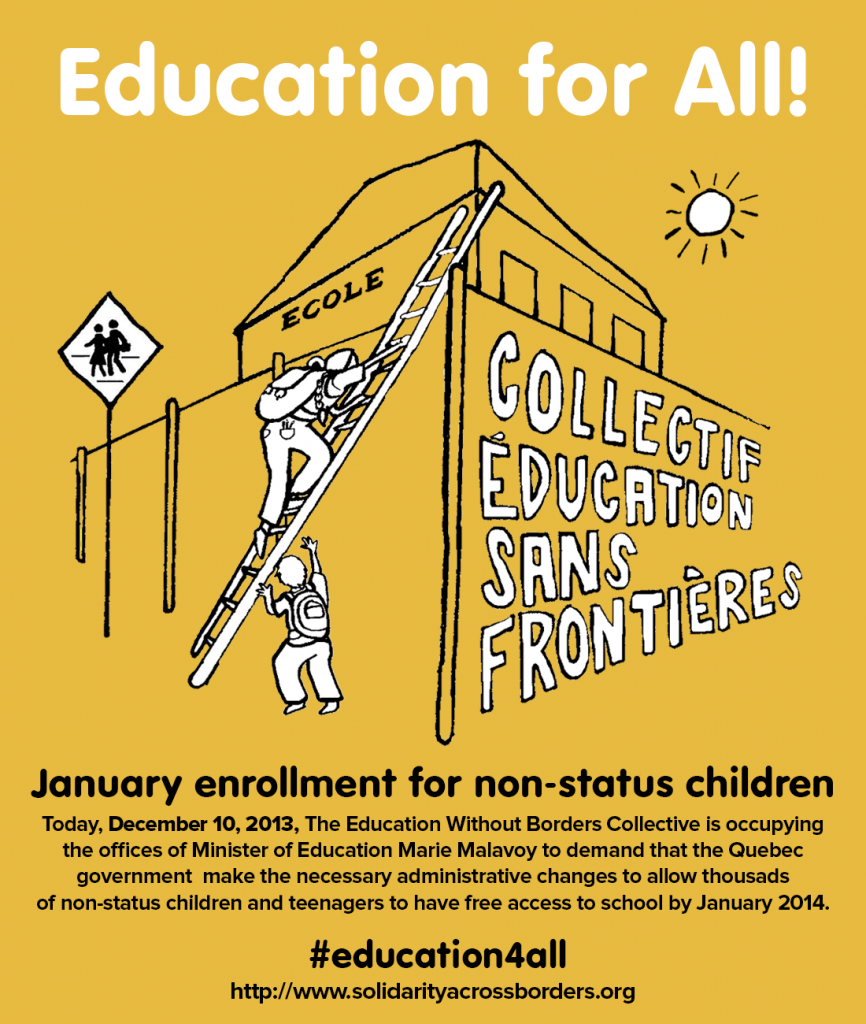 The Collectif éducation sans frontières has pressured the current provincial government, since the first day it took power in September 2012, to rectify the shameful situation in Quebec.

Stunningly, Education Minister Marie Malavoy has never directly addressed the issue of non-status children. Despite repeated letters, numerous mainstream media reports (such as by Radio-Canada’s Téléjournal on May 13, 2012 and the Montreal Gazette on September 22, 2013), Malavoy has consistently refused to comment on the issue.

In June 2013, 9 months after being informed about the issue, Minister Malavoy issued directives to Quebec school boards regarding people with “precarious immigration status”. Malavoy’s directives do not address the issue of non-status children and their families. The directives go even further in excluding non-status children by requiring them to pay $5,000-$6,000 per year to attend primary or secondary school.

A more detailed critique of the Ministry of Education directives by the Collectif éducation sans frontières is linked here: www.solidarityacrossborders.org/en/enfants-sans-papiers-declaration-du-collectif-education-sans-frontieres-au-sujet-des-directives-du-ministere-de-leducation

During the fall back-to-school period, the Collectif éducation sans frontières was directly contacted by several concerned non-status parents who were trying to access schools at various Montreal-area school boards, including the Commission scolaire Marie-Victorin, situated in Malavoy’s constituency. In some cases, children could not register at all. In other cases, they could only register if they paid $5000-6000 per child, up-front. Malavoy created an immense socio-economic barrier for some of the most economically marginalized families in Quebec society, and a confusing situation that is effectively excluding hundreds of children and teens from attending school.

Malavoy and the Ministry of Education can issue clear directives to all school boards to allow access to non-status children, and to end the injustice facing Quebec’s non-status families. We suggest directives worded exactly as follows:

“The Quebec Law on Public Instruction, as well as various human rights accords, stipulates that all children have the right to free education at the primary and secondary level. Quebec has not met that standard. In order to rectify this situation, the Ministry of Education issues the following directives for all School Boards in Quebec to follow starting immediately:

Because the Ministry of Education failed to issue clear directives for non-status children during the back-to-school period in August 2013, we are also providing for a “special enrollment period” (rentrée spéciale) this coming January, so that Quebec can welcome all children to our primary and secondary schools.”