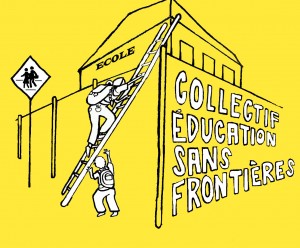 As a new Quebec government gets ready to take power, hundreds of school-age kids are still not able to go to school

Montreal, September 17, 2012 — The Collectif Éducation sans frontières (CESF) urgently demands that the new Quebec government legislate access to free education for everyone, regardless of their immigration status, or the status of their parents. The CESF calls on all political parties – PQ, PLQ, CAQ & QS – to agree that all children deserve access to school, without discrimination.

The CESF works with migrants faced with the problem of non-access to education. The exact numbers of people affected by this reality is difficult to determine. The CESF estimates at least several hundred children – born elsewhere and without legal status (permanent resident, Canadian citizen or other status) or children of failed asylum seekers awaiting deportation – who have no access to schools in Quebec. The CESF has sent letters to each commissioner of the five Montreal-area school boards, as well as all political parties, about this reality.

“These children are the forgotten ones of the return to classes and the election campaign. But there is still time to save their school year,” says Linda Guerry, a mother of a young son and a researcher at UQAM who is involved with the CESF.

She adds, “In a society that claims to be egalitarian and inclusive, any person, regardless of their immigration status, should have the right to free education and this at all levels, from kindergarten to university, as is the case in many countries, for example in Europe, where almost-free education is the norm.”

“Access to education without discrimination is enshrined in numerous international human rights accords to which Canada is a signatory,” says Judith Rouan, a community organizer involved with CESF who is the mother of three children enrolled with the Commission scolaire de Montréal.

She adds, “Many countries in the world have laws and mechanisms that protect the right to education for people without immigration status. In some European countries, there are no documents required for enrollment. In the United States, schools cannot refuse admission to a child because of his immigration status.”

The administrative and climate of suspicion against non-status immigrants are serious obstacles to the enrollment of children in school. The absence of clear guidelines on access to education for these children creates discriminatory situations. Young adults are also affected, and access to vocational training, college or university for non-status people is fraught with pitfalls.

“How can one not be outraged by the situation in Quebec, where legal residence is required for access to free education and where schools accept children without status provided they pay tuition fees from $5000 to $6000 ?” asks Judith Rouan.

The Collectif Éducation sans frontières (CESF) brings together community organizers that are part of the “Solidarity City” campaign initiated by Solidarity Across Borders, and aims to assure access to basic services such as hospitals, clinics, schools and food banks to all non-status migrants. Several organizations support the demands of the CESF, including la Ligue des droits et libertés as well as the Association pour une solidarité syndicale étudiante (ASSÉ).