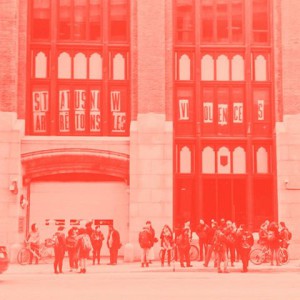 Over thirty (30) activists from Solidarity Across Borders occupied and disrupted the daily operations of the Canadian Border Services Agency for the entire morning.

Montréal, May 3, 2016 – From 9:00 a.m. to approximately 12:30 p.m., members and allies of Solidarity Across Borders occupied and disrupted the Montreal offices of the Canadian Border Services Agency (CBSA) to denounce the violence of the Canadian immigration system, and to demand immediate inclusive and ongoing regularization of every person who is living with documented status in Canada.

Around 9:00AM, a little over 30 activists entered the building of the CBSA at 1010 rue St-Antoine West, got past the building’s security, and occupied the first floor of the offices – where countless people have over the years anxiously and fearfully awaited their deportation. Accompanied by a marching band, the activists put up banners, signs, and stickers on the walls and windows of the CBSA with the slogans like “Status Now!” and “Stop the violence.” At noon, the twenty or so activists still inside organized a teach-in, which was broadcast live over the Internet, about the issues behind, and reasons for, the occupation – which, as a reminder, follows decades of actions and mobilization to try to obtain regularization for people living without status in Canada.

The goal of this occupation was to disrupt the activities of the CBSA – who are active participants in the daily violence experienced by people without status: detention, deportation, separation of families, lack of access to health care and education, among others. For the activists, the CBSA does not have the authority to determine who has the right to stay and who has to leave. In occupying this site of oppression for countless people without status, we are taking back power and affirming our solidarity with every person harmed by this system. “The violence of the immigration system is a grandmother who, in these same offices, had a heart attack and woke up at the hospital to a border services agent threatening her with deportation. It is the parents who choose not to send their children to school for fear that their children without status will be reported by school administration. It is a woman who has survived abuse not having access to support services or aid, such as shelters. This violence is happening every day, we want it to stop,” stated Rosalind Wong, an activist who participated in the action.

Police from the SPVM were quick to enter the offices of the CBSA. Around 12:20PM, while the teach-in was in progress, the riot police, wearing helmets and armed with shields, started to encircle the activists. The police forcibly expelled the CUTV cameraperson from the CBSA offices before proceeding with the arrests of all of the activists inside the offices. The police then began arresting every one of the activists who remained inside. They also arrested two people who were part of the support demonstration in front of the CBSA offices. The arrests outside the CBSA building were brutal, with police forcing activists to the ground. Eighteen people were arrested, and then later release after being charged with mischief. Many of the activists were given conditions upon their release. 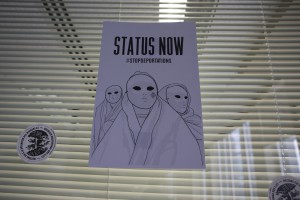 A number of testimonies and accounts are available on the Solidarity Across Borders Youtube channel which further highlight the daily violence experienced by people living without status in Canada:

Press reviews (to be updated)

Articles in Spanish: http://veracruzanos.info/militantes-toman-la-agencia-de-servicios-de-la-frontera-de-canada/ and