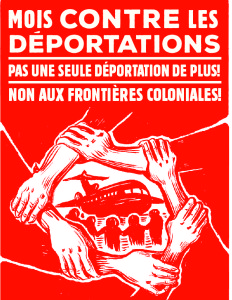 Solidarity Across Borders declares June 2016 a “Month Against Deportations.”

In the context of ongoing struggles for justice and dignity for all migrants, refugees and undocumented people, Solidarity Across Borders and allies are organizing actions throughout the month of June to publicly denounce the violence, racism and oppression of border controls, and their daily impact on tens of thousands of people in Montreal.

This summer we will amplify our voices as community members, lovers and fighters, with public art projects, demonstrations, community meals, and a variety of activities in fierce resistance to colonial borders and economies built on the deportation of certain people.

We invite you to join us this June, and into the future!
Not one more deportation! Down with colonial borders!

Over the past decade, deeply racist and Islamophobic border controls have strengthened. These border controls fortify the “Global North” in order to manage the migration of people from the “Global South”, who are only permitted entry if they can contribute to the destructive advancement of Canadian capitalism, or be exploited under it. Extending its power through imperialism and colonial occupation of Indigenous land, the Canadian state uses these border controls to assure that the majority of those who migrate to Canada live and work in precarity.

As we fight this reality, we want to celebrate the inspiring struggles that have taken place this past year against racism and exploitation, by migrants here in Montreal and around the world.
We have taken to the streets under the banner of ‘Refugees Welcome’ along with others across the world, as the “migrant crisis” was spotlighted within global mainstream consciousness. We know that this crisis is nothing new, although we also know that there has been a notable increase in deaths, by the thousands, this past year, as a direct result of increased border militarization.
Here in Montreal, we have seen the inspiring mobilization of the Haitian community in a collective fight against deportations, following the lifting of the moratorium on deportations to Haiti and Zimbabwe, with the Non-Status Action Committee.
We have seen the Non Status Women’s Collective in Montreal courageously denounce their conditions of oppression and exploitation, demanding status for all. These non-status women have spoken about living their everyday lives as if hidden under a mask, invisible, and struggling for a life of dignity, security and peace. Non status people continue to live in precarity in the shadows of our society.

As we celebrate resistance in our communities, we also want to mourn those who lives were stolen while in the custody of immigration and border authorities.
Since the year 2000, 14 people have died in Canada Border Services Agency custody. Most recently, Francisco Javier Romero Astorga died while being detained at the Maplehurst Correctional Complex in Milton, Ontario, in March 2016.
This is part of a larger struggle against police violence and anti-Black racism, which has seen the mobilizing, in Montreal, of Montreal Nord Republic and Montreal Noir, following the death of Jean-Pierre Bony by Montreal police in April 2016.

We know that struggles against immigration controls, for justice and dignity, are fought by thousands of people in our city, in our communities, often in isolation, and we want to honour those individuals and families for whom courageous resistance is part of daily life.

In confronting and actively fighting the systemic racism inherent in Canada’s exploitative immigration regime, and its oppressive foundations in capitalism and ongoing colonialism, we aspire towards strengthening our networks of solidarity and mutual aid, to counter this reality, here in Montreal.
Join us!

← Building a Solidarity City Together! A Community Workshop & Presentation (May 24)
Call for Solidarity: Only one day remaining for the Lakatos family →