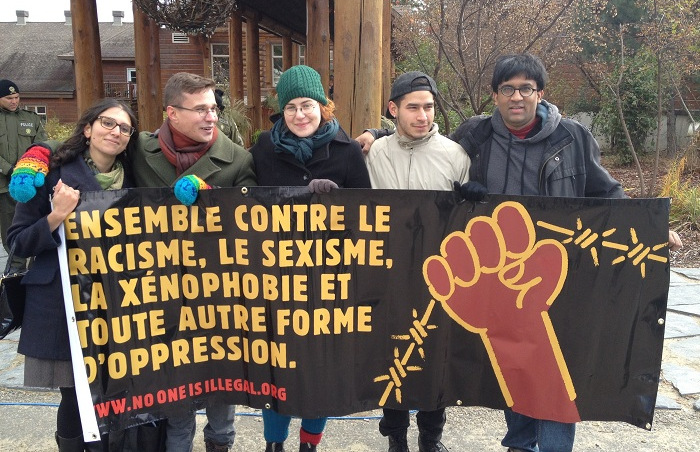 WHERE: Auberge du Lac Taureau
1200, chemin de la Baie-du-Milieu
Saint-Michel-des-Saints
WHEN: TODAY, Friday, October 25
All morning, 9am-1pm.
CONTACT INFO:
-> To reach the protesters directly outside l’Auberge du Lac Taureau, please contact either 514-441-9113 or 514-808-8432.
-> Montreal media contact: Rosalind Wong at 514-759-8346.
Updates are being posted via twitter at www.twitter.com/SolidariteMTL, via facebook at www.facebook.com/NoOneIsIllegalMontreal, and via the web at www.solidarityacrossborders.org
—–
(October 25, 2013, MONTREAL) Montreal community organizers are currently picketing outside the l’Auberge du Lac Taureau in the Lanaudière, a luxurious and isolated retreat where Parti Québécois ministers are currently holding a special meeting. Premier Pauline Marois and her entire cabinet are present, including Minister Bernard Drainville (Minister responsible for the proposed Quebec Charter of Values) and Marie Malavoy (Minister of Education).Protesters are highlighting their opposition to the proposed Quebec Charter of Values.
A banner unfurled outside the cabinet meeting reads: “Ensemble contre le racisme, le sexisme, la xénophobie et toute autre forme d’oppression.” [“Together against racism, sexism, xenophobia and all forms of oppression.”]Protesters feel that it is vitally important to continue to publicly denounce the proposed Charter as xenophobic, racist and sexist, and as discriminating against, in particular, Muslim women.

According to Amy Darwish, who works in a Montreal women’s shelter and is present at today’s protest: “We think that it is unacceptable that the PQ is making a calculated political decision to pander to and stoke the flames of xenophobia and racism in Quebec society. We’ve decided to confront the PQ cabinet directly as they discuss their election plans.”

Darwish adds: “This Charter does not, and is not intended to, advance feminism or gender equality in Quebec. Rather, it quite deliberately uses fellow residents who wear hijabs, turbans, and kippas, as scapegoats for the real social ramifications of the PQ’s austerity agenda. The Charter needs to continue to be very publicly opposed, including at the very doorstep of the Quebec government, like we’re doing today.”

The anti-Charter protesters are part of a grassroots effort called “Ensemble contre la Charte xénophobe” which organized a demonstration in Montreal this past Sunday (October 20). A report-back from that demonstration, including photos and videos, is linked here: http://nooneisillegal-montreal.blogspot.ca/2013/10/report-back-demonstration-against.html

This anti-Charter effort is undertaken on a Basis of Unity that highlights opposition to those aspects of the Charter that attack the personal dignity and self-determination of Quebeckers, including their ability to work and survive in major sectors of the economy. The Basis of Unity is linked in full below.

Protesters are also highlighting how the false debate created by the Charter serves as a distraction from the PQ government’s implementation of austerity policies, such as the devastating cuts to social assistance in Quebec which it began to implement earlier this year.

According to Joël Pedneault, “The Charter of Values is a smokescreen! It is a way to forget the austerity measures of the PQ government, such as cuts to social assistance, which will eventually impoverish everyone. At the same time, the Charter is also a way to impoverish certain people, preventing them from working in hospitals, day care centers, schools, and the public service.”

Protesters are also highlighting that at the same time as the PQ government emphasizes its “values”, it continues to deny access to primary and secondary school to hundreds of non-status children. Marie Malavoy, Minister of Education, insists on charging $5000-$6000 per non-status student in Quebec’s schools.According to Nicolas Quiazua, a member of the Collectif education sans frontières: “We accuse the Minister of Education and the Quebec government of deliberately helping perpetrate a situation of systemic racism. The current situation is intolerable and exposes the governments insensitivity towards the dignity of immigrant families.”

He adds: “It’s clear that access to education for all children in Quebec is not a value of the government.” (For more information about the Education For All campaign, visit:www.solidarityacrossborders.org/en/education-across-borders-collective)- 30 –

We are opposed to the proposed Quebec Charter of Values.

From the outset, the proposed Charter and related debate fails to recognize that Quebec and Canada are built on stolen Indigenous land, and constituted through the dispossession and genocide of Indigenous peoples. We assert our solidarity and support with Indigenous struggles for self-determination and cultural integrity.

We are for equality between all genders but we also assert our support for struggles against patriarchy, sexism, homophobia, transphobia, racism and all forms of oppression.

We oppose those aspects of the Charter that attack the personal dignity and self-determination of our fellow Quebec residents, including their ability to work and survive in major sectors of the economy.

We assert that the introduction of the Charter of Values is both hypocritical and xenophobic. It is hypocritical because ostentatious symbols of one religion will remain untouched (specifically the Duplessis crucifix in the National Assembly as well as the cross on Mont-Royal). It is xenophobic because Charter supporters are appealing to sensationalized and false fears of other cultures and traditions, as part of an electoral calculation to win the votes of bigots.

We reject the monolithic portrayal of our communities and we assert the diversity of our cultures and traditions as well as our multiple identities.

We also reject the Charter as sexist as it is based on stereotypes of women who choose to wear the hijab. We reject the notion that women of faith need to be saved, and instead we support the women who are on the frontlines of their own struggles for liberation, as subjects, not objects or victims, of their own transformation.

We support struggles against poverty, precarity, social exclusion, assimilation, borders, racial profiling, sexism and gender violence. We unite to build across differences and struggle against all forms of oppression, whatever their source.