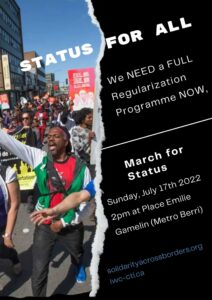 Montreal March for Status for All

Please distribute this widely. Invite your friends through facebook. Share the image on social media. Get in touch to help put up posters and hand out flyers.

The Federal government is moving forward on new plans for a regularization programme for undocumented migrants. We say: this programme needs to include ALL UNDOCUMENTED MIGRANTS, not just those useful to the capitalist economy. No exceptions: every human being deserves equal status.

At the same time, Quebec is heading into an election and the governing CAQ party is once again stirring up anti-immigrant / xenophobic feelings among its base to win votes. Anti-racists must not allow this to sabotage a full regularization programme.

Although some capitalists are decrying the labour shortage, it appears that it is still more profitable to keep us in precarity. We are not disposable! Stop forcing us into the most abusive jobs and then pretending we don’t exist! Stop prioritizing temporary, submissive labour – regularize the status of all migrants!

During the worst moments of the pandemic, we put our bodies in the front lines. We worked hard in the factories, day and night, to ensure that services and products were delivered to the population. Some of us worked hard in nursing homes to make sure the most vulnerable could have the care they deserve. And we turned up again and again in collective efforts to take care of each other: we volunteered, raised funds, took risks, and showed respect for the life of those most affected.

We are worth no more or less than anyone else. But the politicians and the capitalists treat us like we have no value. In the most difficult moments, we were forgotten, rejected, or left behind in their “recovery plans.” In the most critical moments of suffering, illness, poverty, and fear, we asked the government for permanent residency, status for all, so that we could overcome our suffering. They ignored us, offering only the narrowest, most complicated of regularization programmes, excluding the vast majority of us. As a result, we and our families continue to struggle even to survive; still under threat of detention and deportation.

Today there is an historic opportunity with this federal programme to regularize undocumented migrants and we will rise to seize it, despite the obstacles placed in our way! Join us!!