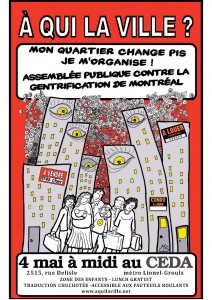 Solidarity Across Borders will be present at this important assembly on Sunday 4 May. The Whose City? Assembly, aims to to discuss the various current forms of resistance to gentrification, in the hopes of arriving at a common position and commitment to struggle together. In a context of shortage of housing and where rents are more expensive, the situation is even more difficult for racialised and non-status people. Please join us!

The Whose City? Collective has noticed that many initiatives are being organized lately around the theme of gentrification. Panels, discussions, research, denunciations, occupations, and demonstrations abound, generally rooted in local contexts. Certain initiatives seek to understand and document gentrification, others to denounce the economic displacement of marginal populations from traditionally popular neighbourhoods, and still others to promote alternatives (social housing, land reserves, popular reappropriation, etc). Despite all of this, gentrification continues to progress, even to the point of effectively becoming a public policy for urban development.

The Whose City? Collective is therefore proposing a Montreal-wide Public Assembly (see poster) to discuss the various current forms of resistance to gentrification, in the hopes of arriving at a common position and a commitment to struggle together. The Assembly will be divided into regional caucuses (North/South/West/East) in which each group/collective will be able to make decisions about the resistance to come.

Public assembly against gentrification : Whose City?
May 4th at noon at CEDA (2515 Delisle)

Should we continue with the multiplication of local actions? Coordinate them more? Converge them? Up the tone? Maintain the diversity of actions?

A proposal will be submitted for discussion in each caucus then debated in the wider assembly.

For this exercise to be worthwhile, we need the participation of activist collectives, APAQs, housing committees, etc! We’d like to know, then, what is your interest in participation in this kind of Assembly?

Looking forward to seeing you!

$: Everything is free, even the lunch!
Kids: Come with the whole family: there will be a Kidz Zone!
Bilingual: Whisper translation will be available from French to English and vice versa.

Physical accessibility: CEDA is accessible to folks in wheelchairs; the door with a ramp can be found at 2520 Lionel-Groulx, just after the parking lot. Please ring the doorbell and we will come and open it!

If you need more information, don’t hesitate to get in touch.

Noon: lunch
1pm: Introduction and exchange
1:30pm: What is being done already?
2pm: break
2:15pm: Discussions in caucuses (North-South-East-West)
3:15pm: Report-back and proposals in large group
4pm: Screening of a film about the occupation of a vacant lot in St-Henri in June 2013

← (May 10) Mothers Against Borders Brunch
(Tuesday 10am) Urgent Gathering: Education for all! →