No to Kenney and his racist “immigration efficiency” 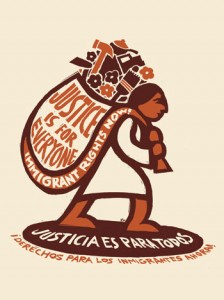 On Friday, April 20, federal Minister of Citizenship and Immigration Jason Kenney will be in Montreal to promote the Conservatives’ market-driven immigration policies. The event is organized by the Conseil des Relations Internationales (CORIM) and sponsored by Rio Tinto Alcan, Hydro-Quebec and SNC Lavalin. Kenney will try to justify “Targeted, Fast and Efficient Immigration System with Focus on Jobs and Growth.”

Un-documented people, migrants of various communities, and people of colour can read between the lines: profit before people.

Since his appointment to the Cabinet in 2008, Kenney has led a vicious Conservative campaign against immigrants, queers, and social justice activists. Internationally, he has been one of the most enthusiastic supporters of Israel’s apartheid regime. At home, he is the author of the recent federal Bill C-31 (the Refugee Exclusion Act), a sordid piece of legislation essentially designed to create a racist, disableist, two-tiered system where refugees get fewer rights based on their nationality. With Minister of Injustice Vic Toews, Kenney is responsible for creating a climate of fear and hysteria around immigrants, whether through the system of “double punishment” (where immigrants to Canada are forced to pay not once for crimes committed but twice by having their immigration status placed into question); through the system of “security certificates” (where immigrants are indefinitely detained or deported based on their profiles); or through witch hunts and deportations of immigrants allegedly guilty of “serious criminality” or war crimes, often without the slightest shred of evidence.

Meanwhile, down the street at the Palais de Congrès, demonstrators will disrupt the Salon de l’Emplois du Plan Nord, a massive spectacle put on by the major corporations involved in the theft and “development” of indigenous land in Quebec’s northern region. In the face of the crisis of North American capitalism, the neoliberal state in Quebec and Canada alike have turned to massive infrastructure and resource extraction as a way out — saving their bacon on the backs of poor and indigenous communities across the country. The Plan Nord operates on the same fundamental logic as Kenney’s racist immigration regime — exploit the many for the profit of the few; crush dissent; hand over power to “efficient” corporations.

Similarly, students across Quebec continue to strike against unjust tuition hikes. We stand in solidarity with this struggle and remember particularly the plight of international students, who according to racist neoliberal logic are faced not only with tuition hikes but out and out deregulation of all fees in many programs. Under Kenney’s regime, their resistance to the corporatization of education in Quebec often puts them at risk of losing their immigration status.

On Friday, April 20th, we take the streets!

PEOPLE ARE NOT FOR SALE!
IMMIGRANTS ARE NOT COMMODITIES!
JASON KENNEY NOT WELCOME!

Organized by: No One Is Illegal – Montreal and allies,
nooneisillegal@gmail.com