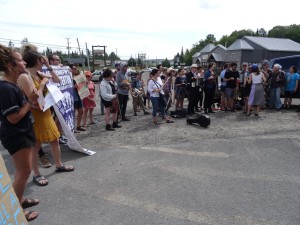 VAL-DAVID, August 22 2019 – A network of over 80 organizations opposed to the construction of a new prison for migrants in Laval kicked off a fall of action this Thursday with an information-picket at the headquarters of the project’s general contractor in Val David. Construction Tisseur Inc. was awarded the contract to oversee construction of the new prison in July. It began work on the site on August 5th, despite sustained opposition by organizations determined to block the project.

“Let’s be clear – by agreeing to work on this project, Tisseur is profiting from the imprisonment of migrants and refugees. We are here today to talk to their workers about why there is widespread opposition to this project and why it is also an anti-worker project,” said Amy Darwish of Solidarity Across Borders. “Tisseur’s owners like to present the company as a socially responsible enterprise but they are profiting from the misery and violence the Canadian government is subjecting migrants to.”

Over 70 people gathered in front of Tisseur’s offices for the first of a series of actions determined to expose the violence of Canada’s system of detention. The festive action featured live klezmer music and speakers from multiple organizations opposed to the new prison. “No matter how you dress it, this is a prison,” said Sam Hoffman, of Ni Frontieres, Ni Prisons. “This new prison is being marketed as a more ‘humane’ way to lock up migrants and refugees but no amount of window dressing makes this acceptable. Companies like Tisseur are helping the government implement an unjustifiable practice.”

Former detainees report serious psychological problems such as nightmares, depression, suicidal thoughts, difficulty sleeping, anxiety, and other symptoms related to post-traumatic stress syndrome. “These centres create a great amount of suffering inside, it’s what detention does to people. You can see the young people suffer especially,” said Carmelo Monge of Mexicans United for Regularization, who has spent time inside the current Laval detention centre.

In recent years, Canada has detained up to 800 children a year at CBSA facilities across the country. “Despite the reporting of migrant children being detained in the US, many don’t realize that this is an ongoing practice here in Canada. Either you take your children to prison with you, or you risk being deported without them,” said Darwish. “Locking up our neighbours, deporting them to dangerous situations and possible death, this is a nightmarish practice that needs to end.”

The new prison is located beside the current Laval Immigration Holding Centre. Scheduled to open in 2021, it is part of a $138 million investment towards increasing Canada’s capacity to detain and deport migrants. Detention centres help maintain a global system of apartheid keeping formerly colonized peoples, including racialized migrants, in situations of poverty and exploitation.