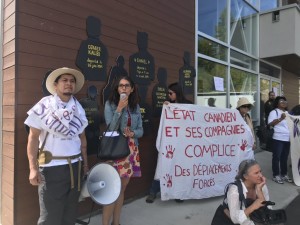 Montreal, 27 August 2019 — The Superior Court of Quebec has granted Construction Tisseur Inc. a legal injunction against the migrant justice network Solidarity Across Borders. Tisseur was awarded the federal contract to build the new migrant prison in Laval in June. The temporary injunction was sought in response to a festive information-picket, featuring live Klezmer music, outside Tisseur’s headquarters in Val-David last Thursday.

“This sets a very disturbing precedent. It is a huge concern for everyone in Quebec when a company uses the courts to silence critics. We remember Barrick Gold’s legal harassment of Éco-societé for publishing Noir Canada. And we see a clear connection: Canadian mining companies like Barrick Gold contribute to displacing people who then end up in immigration detention centres. We won’t be silenced, there is far too much at stake,” said Jane Doe of Solidarity Across Borders.

“We organized the picket last week to reach out to the workers involved in this project. We believe that detention centres for migrants and refugees, and the immigration system they are part of, undermine labour rights. We wanted to engage with Tisseur workers about this during their lunch hour,” said John Doe of Solidarity Across Borders.

“Tisseur complained that we put up posters on their walls. We taped up silhouettes of friends who had been detained and deported, such as Lucy Granados, a single mother and worker from Guatemala who came to Canada after the US-owned factory she was working at moved to Asia, where labour was cheaper, and “Daniel,” a 17-year old boy who was detained at a Montreal high school and deported alone to Mexico,” said Doe.

“We don’t think Yannick Tisseur was afraid of our temporary posters or non-stick tape, but he is clearly scared of these stories reaching his workers. One of the signs read, ‘Tisseur, would you imprison your kids?’ He doesn’t want his workers to know that this prison will be used to imprison children.”

Tisseur began construction of the new prison, located beside the current Laval Immigration Holding Centre, on 5 August 2019. Scheduled to open in 2021, it is part of a $138 million investment into Canada’s capacity to indefinitely detain and deport migrants, including children. Former detainees report serious mental health problems such as nightmares, depression, suicidal thoughts, difficulty sleeping, anxiety, and other symptoms related to post-traumatic stress syndrome.

Statement against the new prison: /fr/no-to-a-new-prison-for-refugees-and-migrants-in-laval

← Tisseur Protest Kicks off Fall of Action against New Migrant Prison in Laval
BRING ON THE NOISE: We won’t be silenced by the profiteers! →