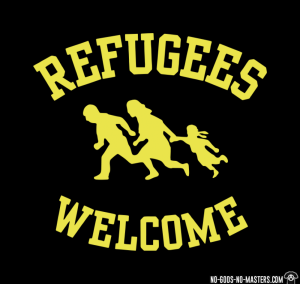 The Canadian state is attempting to further close Canada’s borders to the global dispossessed, specifically those arriving via the United States.

Former cop Bill Blair, now “Border Security Minister,” is currently trying to convince officials in the United States to extend the Safe Third Country agreement to apply to the entire length of the border. If Blair is successful, people who cross the border between official border posts would no longer be able to make a refugee claim. Instead, they would be forced to return to the United States, just as people who arrive at regular border posts have been forced to do since the Safe Third Country agreement was implemented in 2004. The US has not yet agreed to enter negotiations to reopen the agreement, but could do so at any time.

In addition, legal changes were proposed last week which, among other things, would bar people from making a refugee claim in Canada if they had already made one in certain other countries – currently, the United States, England, Australia and New Zealand. This would shut the door on thousands of people. The proposed changes were buried in the budget bill, Bill C-97.

Importance of Opposing these Changes

Together, these two changes will reinforce Canada’s virtual border wall. If we allow either to pass, thousands more people will be prevented from seeking safety, will be deported, separated from their families, and forced underground.

Neither the change proposed by C-97 nor the extended Safe Third Country Agreement will stop people from crossing the border. People will continue to come, but with more danger, greater exploitation and vulnerability, and less dignity. Because globally, people are being dispossessed and displaced and need a place to go; because the United States is not a safe country for migrants.

23 to 30 April. Solidarity Across Borders urges people to take action immediately against Bill C-97’s anti-immigrant provisions. While the timeline is uncertain, the situation is urgent. Many groups are already asking community members to put maximum pressure (call/write/visit/picket/media/occupy) on Liberal members of Parliament so they oppose these sections of Bill C-97 (members of Parliament are listed here: http://www.ourcommons.ca/Parliamentarians/en/members).
** Contact us at solidaritesansfrontieres@gmail.com if you want to let us know what you are doing and want materials we are gathering (fact sheets, images, action ideas).

20 May to 27 May. Solidarity Across Borders is calling for a cross-Canada End Safe Third Country Agreement/Open the Borders week of action.
** Get in touch at solidaritesansfrontieres@gmail.com to let us know about your actions (in Montreal, Quebec, Canada and elsewhere) and get materials we are preparing.

← Rage for Lucy: Bring Her Back! No More Detentions and Deportations!
Abolishing Prisons, Restoring Justice →