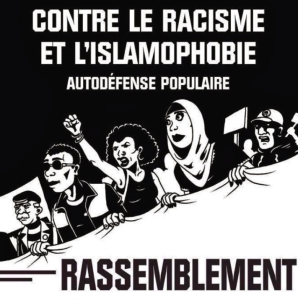 Anti-Fascist Alert!
The racist Jewish Defence League (JDL) plans to protest in Montreal this week
Let’s mobilize to stop them!

Date & Time: Wednesday, August 10, 12:30pm (sharp!)
Location: 255 Ontario East, Cégep Vieux-Montréal
(métro St-Laurent or Berri-UQAM)(NOTE: Details about date, time and location may change. Please consult the facebook event or the Solidarity Across Borders twitter feed for up-to-date details. We will react with flexibility to oppose and confront the JDL during their entire stay in Montreal.)

This callout is in direct support of the callout to Shut Down the JDL issued by a group of leftist Jews living in Montreal. Their callout is linked HERE and also included below, and provides more context about the JDL.]

The Anti-Arab, Islamophobic, racist and far-right Jewish Defence League, based in Toronto, is mobilizing to come to Montreal in order to intimidate pro-Palestinian events at the World Social Forum (WSF). Their protest event is announced HERE.They are planning to mobilize supporters from Toronto to try to silence World Social Forum events in Montreal that are organized in support of the call by Palestinian civil society for Boycott, Divestment and Sanctions (BDS) against Israel. They are attacking organizations like Canadian Friends of Sabeel, Independent Jewish Voices, Israeli Committee Against Home Demolitions, and BDS Quebec.The JDL is a far-right organization – aligned openly with racist organizations like the English Defence League (EDL) as well as anti-immigrant parties and politicians in Europe – that deserves to be confronted and opposed.

The Solidarity Across Borders Anti-Racist Response Committee (SAB Antifa) encourages all progressive allies — anti-racists, anti-fascists, Palestine solidarity groups, migrant justice organizations, community organizations, cultural organizations, and more — to mobilize to stop the JDL this Wednesday (and possibly on Thursday as well).Our safety and security at this mobilization is directly linked to a large turnout of allies. Please share this event widely. Please attend in large numbers! See you on Wednesday!

No fascism and racism on Montreal’s streets! Shut down the JDL!

This is a call from a group of leftist Jews living in Tiotia:ke (Montreal), occupied Kanien’keháka territory:

Join us in shutting down the Jewish Defense League (JDL)’s plan to organize in Montreal on August 10th and 11th, 2016!The JDL plans to send supporters from Toronto to Montreal to disrupt events that support Palestinian liberation at the World Social Forum.

These events are being organized by Canadian Friends of Sabeel, Independent Jewish Voices, Israeli Committee Against Home Demolitions, and BDS Quebec. The JDL plans to meet on August 10th at 2pm at Cégep du Vieux (255 rue Ontario E) – we plan to get there at 1pm to greet them and send them on their way. [The JDL’s plans may change. We advise everyone to check the facebook event as well as the @SolidariteMTL twitter account frequently for any last-minute changes.

SOME BACKGROUND
JDL Canada has spent the last year attempting to create alliances with other fascist groups in this city but have failed to start a Montreal chapter. Their organizing has been shut down by anti-fascists and we strongly believe that this response must continue. While the city government and Jewish institutions such as the CJA and CIJA have made statements condemning the JDL, we again and again see the JDL’s anti-Arab racism reflected in the actions and policies of these same organizations. Instead of relying on these institutions to speak for us, we must speak for ourselves. Instead of arguing with fascism, we must stamp it out!
Join us in greeting the JDL on August 10th!
WHAT IS THE JDL?
The JDL is a Jewish fascist organization founded in New York City in 1968 by Meir Kahane and his followers. JDL Canada was started by Meir Weinstein, a follower of Kahane, who continues to lead the group from it’s central Toronto chapter. JDL Canada has created alliances with with other fascist organizations such as the English Defense League, the Austrian Freedom Party, and PEGIDA. The JDL is a violent direct action group that views Arab and Muslim people as their enemies and sees Palestinian solidarity activism as anti-Semitic.

IS THE WORLD SOCIAL FORUM ANTI-SEMITIC?
Included in the program for this year’s World Social Forum was an anti-Semitic workshop organized by a fringe group called the’ Center of Religious Dialogue for Peaceful Coexistence.’ After communicating our concerns to WSF organizers, this workshop was cancelled. We are pained and frustrated that such a workshop was ever included in the program and believe there is much to be done in confronting the root of this problem. But while we are hurt, we will not allow this pain to be mobilized against our Palestinian comrades.
IS THE JDL CONFRONTING ANTI-SEMITISM AT THE WSF?
The Jewish Defense League had no plans to confront this anti-Semitic workshop. Their trip was planned to target Canadian Friends of Sabeel and Omar Barghouti. The JDL are singularly committed to confronting those in support of BDS and the broader movement for Palestinian liberation. This movement is not anti-Semitic, but crucial also to our liberation as Jewish people.
IS THE WORLD SOCIAL FORUM PRO-BDS?
As such, we are further disappointed that the WSF has refused to endorse the movement for BDS against the state of Israel. Combined with the WSF’s decision to organize this year’s conference in a global north country, excluding hundreds of international activists who were denied visas, our feelings toward the conference are characterized by disappointment and frustration on many fronts. To be clear, we are calling for support specifically for our comrades organizing workshops targeted by the JDL. We will be there to confront this fascist organization and hope you will join us!See you in the streets!