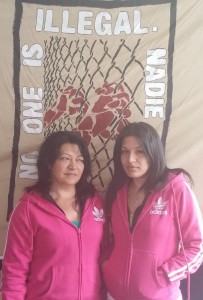 It isn’t over yet: please continue the pressure

The government has agreed to postpone the deportation of 17-year old Gilda Lakatos and her mother Katalin (Robertne) Lakatos for another two months. After Gilda and Katalin courageously spoke out publicly about their story (see details & media coverage below), countless community members and organizations responded, demanding that the Ministers of Public Safety and Immigration stop their deportation.

However, it is not yet certain that the family will be accepted; and it isn’t sure that they will even get a response on their application for permanent residence on humanitarian grounds before the two months are up. It isn’t over yet!

–> Please write a letter to Minister of Immigration John McCallum asking him to accept their humanitarian file immediately. Please send a signed copy on letterhead (organizations) or with a photocopy of ID (individuals) to Solidarity Across Borders, at solidaritesansfrontieres@gmail.com.

Here is a model.

I am writing to support the application of Gilda and Robertne Lakatos and the rest of their family for permanent residence on humanitarian grounds.

The Lakatos family left Hungary in 2011 because of the racism they experienced as Roma, which lead to the suicide of Katalin’s oldest son and near fatal medical neglect of her younger son, and included sexual threats and insults to the two women.

The Lakatos family has lived in Canada for five years; this is a significant length of time and they consider Canada to be their home. The ties and relationships they have constructed here are meaningful and should not be destroyed.

They should not be returned to a place they have found to be unsafe, where racism against Roma is well-documented.

Gilda should be allowed to finish her high school and continue her education as she wants. In all likelihood, she would not be able to resume her education in Hungary.

For all of these reasons, I ask you to accept their file immediately. This family has suffered far too much already.

17-year old Gilda Lakatos and her mother Katalin (Robertne) Lakatos left Hungary with the rest of their family in 2011 because of the racism they experienced as Roma, which lead to the suicide of Katalin’s oldest son and near fatal medical neglect of her younger son, and included sexual threats and insults to the two women.

The Lakatos family hoped to find a better life in Canada. But they arrived in the midst of former Immigration Minister Jason Kenney’s racist crusade to bring the immigration system under market control, which used Roma refugees in particular as scapegoats. A study* of over 10 000 Hungarian refugee claims published last year found that racist streotypes about Roma people had become “enshrined” in Canada’s refugee determination process. The Lakatos family’s refugee claim was refused and they were ordered deported in October 2015. Because Hungary is on the so-called “safe country list”, the family will not be eligible for a pre-removal risk evaluation until 2018.

Determined not to return to Hungary, the family remained in Canada, joining the ranks of Canada’s estimated 500,000 undocumented migrants, highly vulnerable to exploitation and abuse. When Gilda’s father and brother were detained on their way to work in March 2016, and then deported, the two women turned themselves in. They were ordered deported on Thursday, May 12th, despite the difficulties the two men have had since their return to Hungary.

NOT ONE MORE DEPORTATION! STATUS FOR ALL! SHUT DOWN CBSA! STOP THE VIOLENCE!

← Call for Solidarity: Only one day remaining for the Lakatos family
Lakatos Family Still Here: Your Solidarity Still Needed →