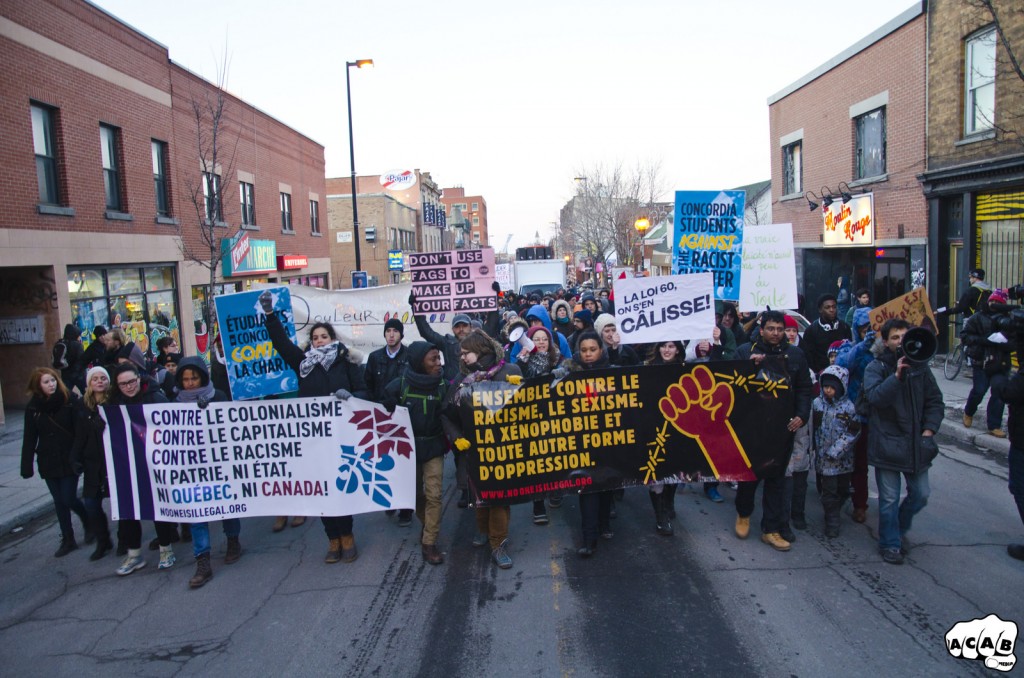 Several hundred anti-colonial and anti-racist protesters gathered and demonstrated on Montreal’s streets the evening of March 21, 2014, on the International Day Against Racism.

Selected PHOTOS from the demonstration have been compiled HERE.

[Read below for a MEDIA compilation, MUSIC selection, the text of the FLYER “Why we are marching” and more.]

The demonstration was organized by Ensemble contre la Charte xenophobe, a network that formed in September 2013 in opposition to the proposed Quebec Charter of Values (Bill 60).

The March 21 protest marked our second mass demonstration to oppose the Charter; the first was in October 2013 (a report from that demo is available HERE). Related efforts include Art Against the Charter (submissions are highlighted HERE) as well as an attempted disruption of a Quebec government cabinet meeting at a secluded location several hours north of Montreal this past November (report-back HERE).

A contingent of Roma refugees in Montreal also marched with the demonstration. They fled racist violence in Eastern Europe and are facing racist and discriminatory immigration laws in Canada. Other contingents include a bloc of parents and children, a Filipino-Canadian bloc, members of the South Asian Women’s Community Center, a queer contingent and a Free Palestine bloc.

The protest marched in defiance of the P-6 anti-protest by-law. Protesters took over the intersection at Rivard & Mt-Royal, and ignored the police announcement that the demonstration was illegal. The family friendly demo, which included many children, marched from the front of Mt-Royal métro station to Pauline Marois’ Montreal office on Sherbrooke street, taking a route along Parc Avenue that passed in front of the oversized cross on Mt-Royal. The racist hypocrisy of the proposed Charter of Quebec Values – which would ban individuals who wear hijabs, turbans or kippas from working but allows for a crucifix in the National Assembly and a large oversized cross on Mt-Royal – was highlighted by demo MCs. It’s also been addressed artistically by this submission to Art Against the Charter.

At the end of the demonstration, a message of solidarity was expressed with the demonstrators encircled and ticketed this past March 15, during the protest against police brutality. That demo started at 3pm, and was surrounded by police at 3:02pm. Our demonstration started at 6pm, and started marching well after 6:30pm, in defiance of the P-6 by-law, but there were no arrests or tickets (a clear contrast to the intense repression and political profiling used to target the anti-police demonstrators of March 15). The organizers of the anti-racist demonstration express their solidarity and support with the March 15 protesters. We encourage organizations that have not yet done so to add their name to the following Community Declaration against P-6, signed by more than 80 groups.

Over 1500 copies of a flyer entitled “Why we are marching” was passed out in the hundreds to by-standers. The text of the flyer is included below and linked HERE.

Music again constituted an important part of the street resistance to colonialism, racism and the Charter. The anti-racist playlist is included below as well.

If you are interested in getting involved in ongoing anti-colonial, anti-racist and anti-Charter organizing, please get in touch via contrelachartexenophobe@gmail.com (we’ll put you in touch with like-minded groups, and let you know about our own ongoing organizing).

WHY WE ARE MARCHING

(Over 1500 copies of a flyer entitled “Why we are marching” was passed out in the hundreds to by-standers. The text of the flyer is included below.)

We are marching today because:

– We support the self-determination and sovereignty of all Indigenous peoples in “Canada” and “Quebec”; Canada and Quebec are unjustly built on stolen native land.

– We oppose the politicians and corporations in both Canada and Quebec that continue to exploit the lands and resources of Indigenous peoples – Tar Sands, pipelines, Plan Nord, Anticosti and more — against the clear wishes of Indigenous nations.

– We remember and salute the anti-racist struggles of the past, especially the struggle against apartheid in South Africa; the 1960 Sharpeville massacre in South Africa is commemorated each March 21, as part of the International Day Against Racism.

– We denounce racism in Quebec, which continues to exist and persist, and which has increased in the past year, especially with increased harassment and attacks on Muslim women.

– We support the struggles of all racialized and marginalized communities for their own dignity and self-determination.

– We support anti-racist feminisms and anti-racist queer struggles that refuse to accommodate themselves to false fears and xenophobia.

– We are opposed to the proposed Quebec Charter of Values (Bill 60), which is an electoral ploy that encourages racism and xenophobia in Quebec society.

We march for many more reasons, united in opposition to all forms of oppression and in the belief that our solidarity and unity against colonialism and racism is our most effective tool.

INFO: http://ensemblecontrelacharte.tumblr.com
If you are interested in getting involved in ongoing anti-colonial, anti-racist and anti-Charter organizing, please get in touch via contrelachartexenophobe@gmail.com (we’ll put you in touch with like-minded groups, and let you know about our own ongoing organizing).